I learned faith from my father, a birth-right Quaker and a devout atheist. Daddy was an equal-opportunity anti-God fanatic. With little provocation, he delivered passionate sermons aimed at converting believers to Reason and Logic. He was evangelical — a missionary among the washed hordes of Christians in semi-rural Ohio. Like all True Believers, my father suffered for his faith. In our little town, people like Daddy who openly, loudly — even brazenly — didn’t attend church were looked upon with suspicion, to say the least.

He tried to raise me as a Quaker without God and hundreds of miles from any Friends’ meeting house. Social justice, the equality of persons, the evils of war — he lectured me on these topics. Countless times, as the sole member of his congregation, I listened attentively as he thundered on in rolling tones about the curse of ignorance that breeds superstition, the hypocrisy of worshipping on cushioned pews beneath stained glass windows instead of feeding the hungry, the impossibility of the virgin birth and the resurrection, the contradictions of the bible, the pagan antecedents of Christian holidays, and so forth and so on, ad nauseum.

I soaked up his every word. I believed. God was an invention of men. Religion was anti-science. If something can’t be proved by scientific, objective measures, it doesn’t exist. Daddy’s worldview wove a thick cloak of superiority about him while others stood naked and exposed in their ignorance.

But now I’m a Quaker, and I consider myself Christian within that tradition.

I didn’t abandon the faith of my father overnight. Mine was a gradual turn about. Even while I was still enthralled by his pronouncements, I was reading heretic texts like The Sleeping Prophet and devouring “non-fiction” on mysteries like Big Foot and UFO’s.  (Decades later we moved to Virginia Beach and I came to know people who knew Edgar Cayce and offered more stories of his second sight.) My friends and I were fascinated with Ouija boards and ghosts.

Even in junior high, the idea of reincarnation appealed to me. The way Cayce explained it, reincarnation sounded fair, and we all want the world to be fair, right? Maybe my life this time is an easy one because I starved to death in the last one. Of course, reincarnation can be used to enforce a caste system and justify inequality. In that way, it’s no different than a religion to keep people under the thumb of the King or in the rifle-sight of a tribal chieftain because obedience and piety are rewarded in the after life so keep your mouth shut and do what you’re told.

Though I liked the idea of reincarnation, it wasn’t enough to undermine my faith in Fundamentalist Atheism. Even from where I stood — a place of relative privilege and comfort — it was obvious any God worth worshipping wouldn’t allow people to suffer like lots of them obviously were. If there was a God in charge of this world and all its hunger, sickness, and premature death, he wasn’t a god I wanted anything to do with anyway.

About mid-way through college, five months pregnant and not married (this was a big no-no back in 1970), I was sitting on my dorm bed at college idly considering a jump from the window and a plunge to the asphalt three stories below. (This sort of thinking I learned from my mother.) Then I heard that still small voice: You don’t have to do that. Things will be difficult for awhile but everything will be all right in the end.

I heard the voice. I never doubted the words. It was enough to keep me going. I didn’t bother to weigh the silent voice on any scientific scales. I just accepted it and moved on.

Three years later, I returned to campus with my daughter to finish my degree. And I met a really nice young man. And I heard that voice again: This is the man you are supposed to marry but you’ll never have any money.” This was an Oh Shit! moment for me, because, in my (still) atheist worldview, money was the only security. The more money the more security.

So I set aside my need for money and that kind of security and married that nice young man. We never were hungry or homeless but we had some lean years and some hard years. I never doubted that we were supposed to be together — I’d been told — and we came through those years a out on the other side.

But in spite of these and other mystical life-changing moments, abandoning the faith of my father was a gradual process. My husband had been raised in a strict Baptist Church and was in no hurry to ever join another one. Years went by and were we unchurched, but, soon after we moved to a town with a Quaker meeting, we began attending.

I suspect anyone who’s been gifted with trustworthy directions and guidance from a source that defies rational explanation longs for frequent communication from that source. In my life, that voice has been crucial and rare. The best substitute I’ve discovered is to fill my life with good people and learn from their examples. And in that little Quaker meeting we first joined, there were people well worth emulating. 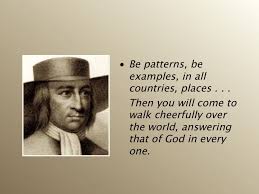 When I told my father I was attending a Friends meeting, his first question was “Race Street or Arch Street?” I assured him we’d joined a Hicksite congregation and he seemed, for an atheist, oddly satisfied. He took great pride in his Quaker forebears and cousins in spite of their irrational beliefs.

Once Daddy got over being pleased that I’d joined the Religious Society of Friends — that his daughter had come into the very fold he’d abandoned — he felt compelled to argue with me about the existence of God — God anywhere, in any form. Since you can’t prove God exists, Daddy argued, God does not exist.

[Oddly enough, I have a disease — CFIDS/ME — that cannot be confirmed with a laboratory test or x-ray. For years, doctors used that same argument against people like me: We can’t prove you’re sick so you are not sick. In spite of their sound reasoning, I am sick. Medical science is catching up with my experience.]

I came back at my father with arguments for the existence of music and love, neither of which have scientific explanations. (Or so I said at the time. I’m wouldn’t make such pronouncements today.)

My current and fluctuating understanding of God is whatever It Is that binds us, makes us human — like the force that holds bees to a hive, working together for the greater good. It’s hard for me to see any sense in altruism without God. If there’s no meaning beyond one’s own individual needs and pleasures, what’s wrong with doing whatever it takes to achieve whatever’s best for yourself? Ayn Rand, anyone?

Do I have a personal relationship with the Lord? Well, it’s an on-again, off-again kind of thing. I don’t always stay in touch. But here’s what faith means to me: an ability to accept uncertainly.

My father and other fundamentalist atheists I’ve met — the brand of atheist compelled to harangue us ignorant church-goers — have a great deal in common with religious fundamentalists: the drive to be RIGHT! The basic flaw in atheism is the claim of certainty. To me, agnosticism seems more consistent with reason.

The idea that something can only exist if human science confirms it’s existence is a strange one. It’s like claiming the Grand Canyon didn’t exist until Joseph Ives sent his Report upon the Colorado River of the West; Explored 1857 and 1858 to Washington, D.C.

I can’t explain what I believe and I can’t justify it to a non-believer. That’s fine with me. I don’t care if I’m wrong and I can live with uncertainly.

Isn’t that part of what it is to be human?

7 thoughts on “Atheism: the Faith of My Father”