Do you believe in love at first sight? Love at first sight took about three weeks for me after I met the man I sometimes introduce as my first husband (so far he’s also my only husband). It took him a few months longer, but I don’t hold that against him anymore.

We have a friend — let’s call him Pat because that’s his name — who met a young woman — let’s call her Teresa — one evening and that same night told her she was the girl he was going to marry. She scoffed at him. He was right. For him, it was love at first sight and it’s stood the test of time.

You meet someone new. They have a certain spark in their eye and you start talking to each other and you laugh in the same places. And you know that this is a person you want in your life.

A good friend is someone you can laugh with, cry with, confide in, share a story or a life with — someone who makes your eyes light up. Maybe you haven’t seen your friend for years but, when you sit down with them again and start talking, it’s like the conversation never stopped.

Once my best friend and I got the sillies at a middle school band concert because one side of the band director’s staticky pants crawled up his leg during the concert and his socks didn’t match. We were laughing so hard we almost got kicked out! And we were the parents!

Then there was the time another best friend and I baked fortune cookies with Bible verses inside. It was a lot of work — the cookies had to be folded up while they were still hot and pliable, right out of the oven. We laughed while we burnt our fingers just so we could set these cookies out with tea and coffee for the rise-of-meeting fellowship. And what was so funny, you may well ask? You didn’t see the Bible verses we choose. There is a ton of weird advice in the Bible.

I remember a lovely afternoon over mugs of tea on a friend’s screen porch. She was explaining the meaning of a phrase used by Turkish storytellers. I thought I’d never forget it. I did forget it, but I remember the delight in the story and the company.

Before I got sick, I was more gregarious. I was always going somewhere to do something with somebody. But chronic fatigue/fibromyalgia has knocked the stuffing right out of me and visits with friends are fewer and further between than I would like. And it may take me a day to two to recover. It is hard to maintain friendships when I spend way too many hours limp and exhausted, not up to the effort of conversation. On those days, I have a legion of other friends patiently waiting for my attention: Books.

Books are the good friends whose company is offered in just the right measure at just the right time. They are never offended if I close the cover and close my eyes for a rest. They just wait patiently until I return. Here are a few who have graciously visited with me lately.

This book has a deceptively simple premise. The Mom of the title is lost in a crowd at a the train station and her children and husband search for her. For months. I was spellbound. This seemingly straightforward plot surreptitiously meanders into a narrative meditation 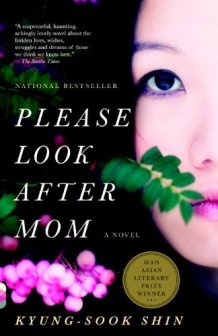 on family and sacrifice. Like the Mom’s children, I was left wondering exactly what happened. The last pages offered not so much a resolution, as a graceful, grief-ful acceptance.

Because the story is set in South Korea, a geography and culture I know next-to-nothing about, the book took on fairy-tale qualities for me. The contrast between the illiterate, hard-scrabble mother and her educated, urban children grew larger and larger as I turned the pages. If the setting had been somewhere in the United States, my own assumptions — about the characters, the landscape, “reality” — would have overwhelmed what was actually written. I would have missed the beautiful questions set forth in the story.

The author has many other books to her credit and is popular in her native country. I look forward to reading more of her books and hope the translation reads as smoothly as this book did.

This is the full title of the P.G. Wodehouse collection as purchased through Amazon for my Kindle (only $1.99!). It’s a title worthy of P.G.Wodehouse himself!

The first pages of the first P.G. Wodehouse book I ever read were much like meeting that instant new friend. The sparkle in the eye! The underlying optimism! The cheerful exuberance whilst surrounded by human foibles! Let’s let the man speak for himself:

” . . in these days of rush and hurry, a novelist works at a disadvantage. He must leap into the middle of his tale with as little delay as he would employ in boarding a moving tram car. He must get off the mark with the smooth swiftness of a jack-rabbit surprised while lunching. Otherwise people throw him aside and go out to picture palaces.”

Truer words were never spoken! (Speakers at the James River Writers Workshops are forever telling us this.) The language is perhaps a bit antiquated, a bit English, but still fresh and lively at one hundred years old. Wodehouse just zips right along and the phrase “rollicking good fun” surely applies, even as I am stretched out on my bed, motionless except for my eyes scanning the printed page. 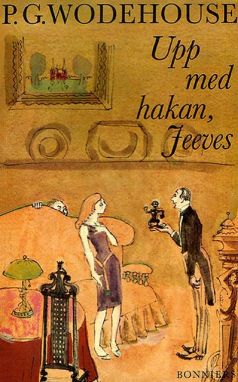 Nothing truly tragic happens in a Wodehouse novel. There are no nasty surprises. There are always motorcars and sweeping lawns and long galleries and conniving aunts and well-heeled financiers and dotty Lords and fair young maidens and impoverished young men in love with them who somehow still have a valet and cigarette money. Even whenWodehouse introduces a “working stiff” the reader knows things will come out all right in the end. Wodehouse is not Charles Dickens.

Wodehouse’s England disappeared before he quit writing about it. Two World Wars hastened the changes. His novels remained stuck in an era long gone. Most of the plots, like historical romance, are set against a background of wealth. The characters are insulated from real human misery.

Wodehouse also wrote stories of teenage boys at school, playing cricket. Blow by blow accounts of cricket matches, however momentous in the lives of the boys, are not my cup of tea, no matter how fine the teacup. Now “feather-brained Bertie Wooster and his sagacious valet Jeeves” (as the collection’s biography refers to them) — these two can make me laugh. They are fine companions on a grey winter’s day.

Of course, I had to read a historical romance novel this week. Once a Duchess is from Elizabeth Boyce, a writer previously unknown to me who is a friend of a friend. I think I chose her first book for my introduction to her work.

The initial set-up was intriguing: we find a young woman and her single remaining 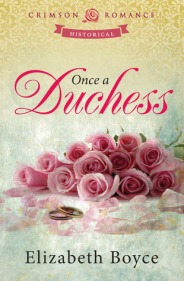 servant living in a humble and chilly cottage. The disgraced ex-duchess, shunned by society after her divorce for adultery, is out of funds (hence the chill inside the cottage) and faces hard choices. She takes a job as a cook at the local inn and — of course — the Duke shows up in the dining room unexpectedly. The plot had the requisite number of twists, and a one or two on top of that that I never saw coming, that kept the Duke and his one true love apart until the last few pages.

Some blood was shed, some tears were wept, some unforgivable words were uttered. Apologies were made but not accepted. Ships were loaded with cargo, bound for South America. But true love conquers all.

This book was the quintessential historical romance experience. Never make the mistake of assuming that these books must be easy to write. They aren’t. And it’s always nice to discover a writer accomplished in my favorite genre. Boyce’s next book in the series is ready and waiting for me on my Kindle.

And this graphic novel is waiting for me next. It’s non-fiction and doesn’t promise any happy endings, so it will not be the reassuring comfort of light conversation. It will take a bit more energy to read.

According to my husband and youngest son, and the reviews I’ve read, March will be well worth the energy it will take out of me to read it.

Some friends are like that. Sometimes I need time to recover. Those can be the best friends of all.

What are you and your friends reading?

One thought on “Significant Others”